The value of bees to mankind

Bees are hugely important for us, as they pollinate agricultural plants. Their global economic benefit is EUR 265 billion (figure from 2015).

The benefit of bees is usually measured on the basis of the products that come from them directly. Honey is of course the most popular product. Bees collect nectar from flowering plants or honeydew from coniferous trees and store the juices in their honey stomach. The harvest is stored in honeycomb in the hive and processed and dried by the hive bees. Only when the water content is under 18 per cent can the honey be harvested, up to four times a year.

Honey is harvested by the beekeeper using a honey extractor. First the wax covering is removed from honeycombs in their frames and they are then put into a honey extractor. The centrifugal force in the honey extractor draws the honey out of the individual cells without destroying them. The beekeeper then returns the honeycombs to the beehive. The honey flowing out of the extractor is collected in a container and filtered through a sieve a few times to ensure that it no longer contains any wax or propolis residue (bee glue). Then the honey is put into honey jars and left for a few days so that air bubbles and the smallest particles of wax can rise to the surface. 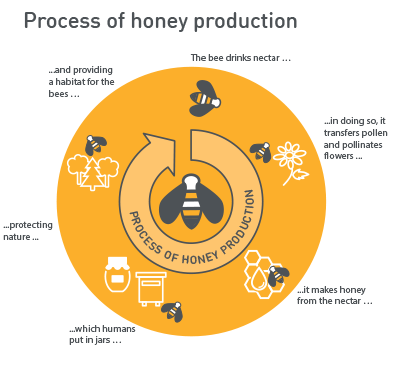 Another bee product is wax, which is primarily used as a natural product by the cosmetic and pharmaceutical industries. It is a product excreted from the glands of the honeybee. The bees use the wax to construct the honeycombs. Old, brown honeycomb is removed by the beekeeper and melted down, and impurities are removed. The wax, which is now light and pure again, is cast into new wax centre walls and returned to the colonies or recycled in other ways. Beeswax is a valuable raw material that can be used to make beeswax candles, among other things. The wax from an entire beehive is needed to make one candle. Beeswax candles emit a soft light and fill the room with a pleasant aroma.

Pollen is also a popular product. All plants produce pollen, which the bee picks up when it visits flowers, enriches with nectar and transports to the beehive. Within a year a single bee colony collects between 30 and 60 kilograms of pollen. The beekeepers attach a pollen trap at the entrance to the beehive to collect it. Pollen is often used as a nutritional supplement. Pollen is rich in vitamins, minerals and proteins. It strengthens the immune system and improves mental capacity.

Bee glue, also known as propolis, is another important bee product. Bees collect resin from different trees, bring it to the beehive for sealing purposes and thus protect themselves from bacteria and fungi. A bee colony is capable of collecting 50 to 500 grams of resinous mass per year. Propolis is used in many medicinal products. It is a natural antibiotic as it has an anti-inflammatory effect and strengthens the immune system. The active ingredient is available for people in capsule form, as a medicinal ointment, cream or herbal drink.

However, probably the most valuable bee product is royal jelly. It can only be produced by young worker bees, which make it out of honey, pollen and their own glandular secretions. Only the queen bee gets to eat the royal jelly, and it gives her a life expectancy 50 times longer than her colony. For this reason, the queen bee is a symbol of vitality as well as performance and vigour. Royal jelly is used in the cosmetics industry as well as the medical industry. It can be used as a natural remedy for viral infections and has a revitalising effect.