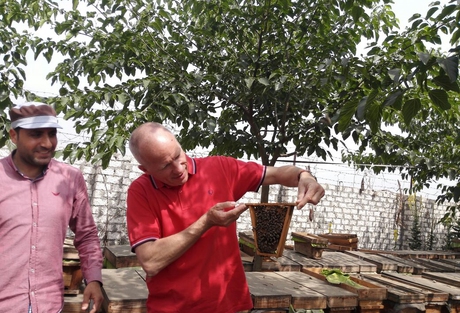 Hero Middle East & Africa engages in long-term project to save their local bees by creating new hives, and boosting its popularity

Hero Middle East & Africa (MEA) has adopted a huge project to protect native Egyptian bees Apis mellifera lamarckii from extinction, and boost its popularity among beekeepers.
One of the main reasons for the declining bee health was insecticide poisoning as the old beehives were located close to vegetable plantations.
Another reason can be found in a misconception on the bee’s habitat as Mahmoud Bazan, Managing Director Hero MEA, explained.
“The wrong belief that this type of Egyptian bees should only live in beehives made of mud meant it was not popular with beekeepers as these hives are difficult to take care of. However, Hero has succeeded in raising this type of bee in beehives made of wood with the assistance of a group of German specialists,” Bazan said.

The project started by bringing the bees to 300 new beehives. Today, Hero MEA has built 600 additional beehives with local beekeepers, who were given appropriate training.
“The apiaries are taken care of by our local beekeepers. This way of beekeeping depends much more on natural resources, and differs from other methods. By engaging beekeepers in this project, we are educating them and also spread awareness in the community,” Bazan said.
The Apis mellifera lamarckii is one of the rarest in the world. It has existed in the Nile Valley for 5,000 years and depictions of it were also found engraved on the walls of Pharaonic temples.
It is known for its high degree of disease resistance, its adaptation to the Egyptian environment, and the high quality of honey it produces.
Bazan said the objective of Hero MEA’s project is to build and strengthen the native bee colony to increase its population. This is part of the company’s sustainability efforts towards the environment to ensure its mission of conserving the goodness of nature.
The project was launched in 2016 as part of a wider initiative from the Hero Group, which includes Hero MEA.
Called bee careful, the initiative aims to protect bee health and boost bee populations. A platform was created to serve as a tool for education and to support beekeepers.

About Hero MEA
Hero MEA is a food company based in Egypt. It supplies 40 countries in the Middle East & Africa region with natural spreads, snacks, and baby & toddler milk and food. Moreover, Hero MEA runs the largest jam manufacturing factory in the region, making it a regional export hub.